Lucinda Allen, 38, from Stourbridge in the West Midlands was 6 months pregnant when she had intercourse with her husband Tony. After climaxing twice, she experienced a sharp pain just above her right eye. 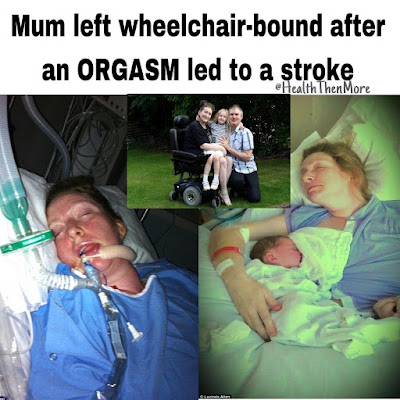 She said, 'My pregnancy had been overshadowed by gestational diabetes, which I was managing through diet and exercise. I checked my blood pressure most days. On this particular Saturday morning, I checked my blood pressure
- which was low - so decided to get back into bed with my husband.'
.
After having sex Lucinda experienced the painful headache but thought nothing of it as she regularly had a short burst of head-pain immediately after she'd climaxing.
.
.
Scans later showed that she had suffered a brain haemorrhage and was put into an induced coma to let her brain rest: during that time, she had brain surgery – a craniotomy to release the pressure on her brain where the blood had leaked out. Lucinda was left paralysed down her left side and is now a full time wheelchair user with a healthy four year old girl.
.

📚🏨Headache associated with sexual activity (HSA) is an idiopathic headache precipitated by sexual excitement (masturbation or coitus) and not associated with any intracranial disorder such as aneurysm.
.
There are three types of sexual headache:
1️⃣Type 1 is a dull ache in the head and neck that slowly intensifies as sexual excitement increases, and is believed to be caused by muscle contraction similar to tension-type headache.
2️⃣Type 2, also called 'vascular-type,' is a sudden severe, explosive headache occurring at orgasm, which may be due to increased intracranial pressure.
3️⃣Type 3, the most uncommon type, is a postural headache resembling that caused by decreased CSF pressure, perhaps due to a meningeal tear during coitus
.
💊💉HSA may be prevented in some patients by weight loss, a more passive role during intercourse, variation in posture, limitation of additional sexual activity on the same day, and medications such as propranolol and diltiazem.

Have A Spa Pedicure At Home- Ready Pedi Go!

It's another weekend and you have a chance to give yourself a spa treat at home with a simple do-it-yourself (DIY) pedicure to relax, revive and soften your tired feet.