Did you know? Trepanation was thought to be a treatment for migraines 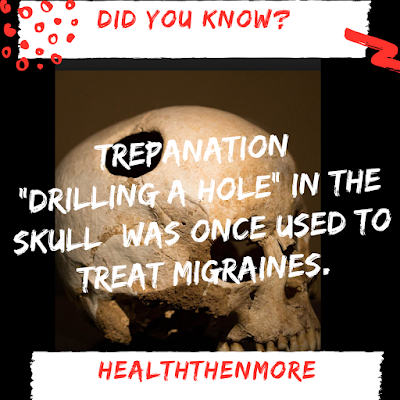 In ancient times, trepanation, also known as trephination was thought to be a treatment for various ailments, including migraines.
.
The practice continued well into 1936, when Alfred Goltman, a physician from Tennessee, observed something strange about a nurse with a migraine that he was treating for allergies. In the left frontal region of her skull, the woman had a depression, with a marked concentration of blood vessels. Four years earlier, the first neurosurgeon in Memphis, Dr Raphael Eustace Semmes, had drilled a small circular opening known as a “burr hole” into her skull during one her severe headaches under local anesthetic.  The nurse survived the surgery, but her migraine headaches did not stop.
.
Goltman later noticed that during her headaches the depression left by the surgery began to fill up. As the migraine attack ended, the swelling would recede. Goltman’s observations helped influence the widespread acceptance of a theory that would dominate understanding of migraine until the 1970s: that the origin of migraine headache must be vascular, characterised by dilation of the blood vessels during the attack.

Nurses working under ISIS must speak fluent English under strict new regulations enforced by the so-called Islamic State of Iraq and the Levant. The order was announced by an Islamic State militant with a loudspeaker to residents of Taqba city.